You know those days when you get home from work, look in the fridge, and inspiration just strikes from nowhere.
Inspiration tonight was Lemon Chicken.

A bit of research online had a few different variations. Some were roasts, some were barbecued, but I really wanted something with a sauce so I could serve it with rice.

So I found a recipe where I had most of the ingredients (bestrecipes.com.au) and set to it.

The chicken thigh was coated in flour which had garlic flakes and lemon pepper mixed into it.
The chicken then went into a hot oiled pan to bubble away.
I put on the rice (1 cup rice to 3 cups water let it boil and then simmer) and some spaghetti for the non-rice eating boyfriend.
After the chicken had been cooking for 10 minutes I added a pint glass of water which had a chicken stock cube, some pepper, some ground ginger, and a pinch of sugar. That boiled away until it reduced and started looking like a sauce.
Whisk together an egg yolk and some lemon juice. I only had bottled lemon juice so about a quarter cup.
That went into the pan with the chicken.

Once that was all cooked I put some bok choy in the microwave.

Some fresh parsley from the garden and a meal was made.
Definitely a keeper (with rice or spaghetti) 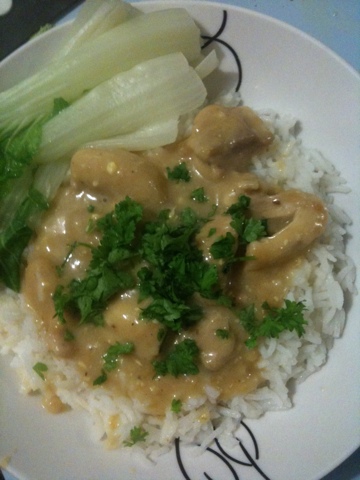 One thought on “Lemon Chicken”