I have now got a pattern shop!

I designed some patterns for my week as the Cut Out and Keep Superstar and yesterday I loaded them into ravelry on a bit of a whim really.

Well I published them and already this morning I have 5 comments (yes 5 individual people who are not members of my family or my twitter friends*) from people liking my shawl pattern!!!! I’m just a little gobsmacked 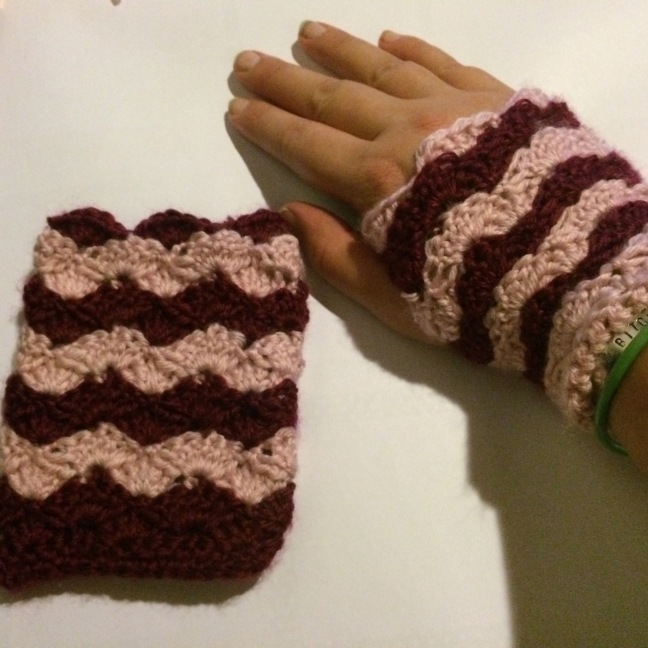 *A special shoutout to Shay who is not a knitter, but still retweets and comments on all of my knitting posts. I appreciate the support mate 🙂

**Just a note for those curious about my Designer Name. That is not my real name, however Ravelry requires me to have a credible sounding First & Last name so I chose one that I know is unique and does’t appear anywhere else on the internet (except for birth records from the 1800s).

I don’t know which yarn fairy* I’ve pleased but Ravelry is now available for me to peruse from my work PC.
Previously it was in the same list as facebook, twitter, and pintrest and whenever I tried to access it, instead I got a red screen telling me that Ravelry was not an acceptable website to view at work.

Of course I absolutely agreed with that decision! The last thing I need is for my already short attention span to be distracted by another SQUIRREL!!! I mean time wasting website, when I’m desperately trying to focus on work.

But I do get a lunch break, which I usually spend untangling my brain and catching up on blogs, news, and now I can catch up on all thing Ravelry.

Which has made me realise just how neglected my account has been this year. And also how many more objects I’ve finished that I had forgotten about. (My Sisters Knitter recently blogged about why we remember what’s unfinished more than what we’ve finished. It’s worth a read as well as the Psychology Today article which inspired it.)

My topographie hat somehow made a mention in Knitting & Crochet Blog Week, but then I forgot about uploading any photos or updating my projects page.

Which is unusually odd as I actually wear this hat all the time! I love it’s slouchiness, and I think the pattern really makes the colours pop.

*the yarn fairy may just be my work-friend in IT whose daughter is learning to knit and so I keep sending him ravelry links of things which might help her out.
He’s probably annoyed that he can’t open them at work so he waved his magic IT wand.
It’s nice having friends in IT.

I still don’t know what quite possessed me to make a bright yellow cardigan.

I guess it’s like when you see a paint sample and it looks really pretty, but then you put it on the wall and are overwhelmed by the overall effect.

When I was surrounded by the 40% off all yarn sale, with all those yarn fumes and balls of squishy goodness, the yellow Moda Vera Ayanna looked beautiful.

Teeny-tiny needles are not my friends at the moment so I’ve been looking for bulky yarns and chunky patterns.

Fezziwig absolutely flew off the needles relatively speaking. It still took me about a month to finish but as someone who is trying NOT to knit it still felt like it was going quickly. The construction was really easy, sure picking up 200+ stitches was a bit of a pain, but not having to attach sleeves more than made up for that. I’m terrified of patterns that have attached sleeves. It just sounds like a recipe for disaster.

The best thing about it is that it’s so warm. It’s like wearing a wooly blanket made from sunshine and lollipops with pockets!!! 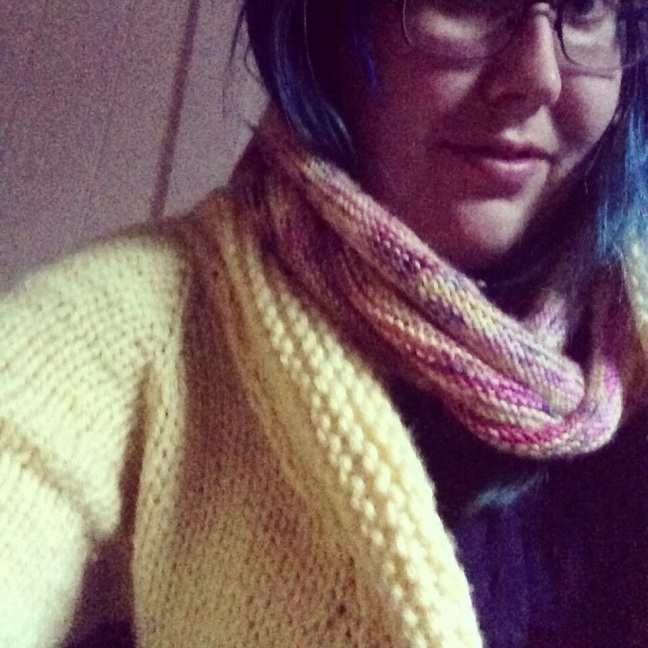 I haven’t even finished my first jumper and I’m already thinking about another one.
Which is surprising because it’s taken me ages to get to the sleeves and I’m not enjoying knitting them.

But a tweet from a friend asking about knitted hoodies led me down this rabbit hole.

All photos are from ravelry and the photos link to the patterns. 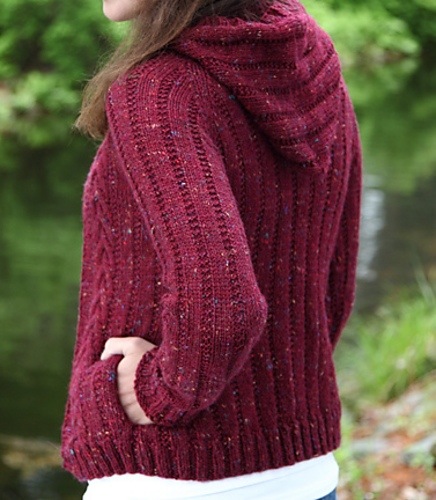 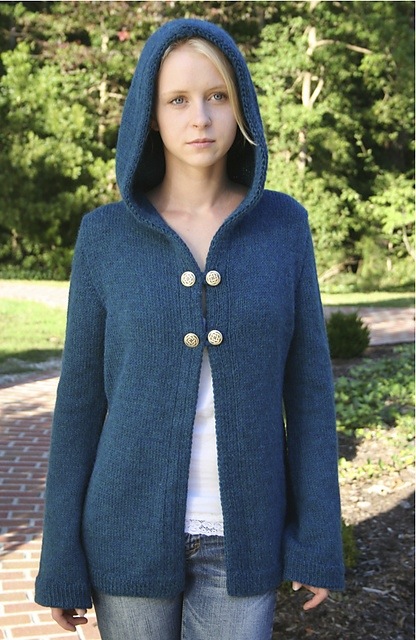 This cowl has been on the needles for three weeks now. And in all those three weeks my football team have won.
But when I wore it for the first time yesterday, we didn’t win.
I’m still more inclined to blame the players, particularly as inaccurate kicking was clearly an issue yesterday so I’ll give my scarf another challenge next week against the team on top of the ladder.

But enough about football, and onto the knitting.

This gorgeous yarn is from ladybug fiber company.
I was researching for my birthday wish list (which no one in my family took any notice of anyway) and I found the perfect teal, grey, and black yarn.
A quick twitter poll told me to buy it and I obeyed.

The perfect pattern had to be found, and when I stumbled upon this cute but simple rib cowl I was on to a winner.

I made it longer than the pattern indicated because I wanted it to wrap around twice. And I’m super happy with it. Even if Port Adelaide don’t win every time I wear it.

Somehow I managed to get another piece of Port Adelaide merchandise in every single shot (except the back of the boat). Purely coincidence. Or proof that I own a lot of merch.

Well I started it on Friday night and finished it on Monday night. That’s a pretty quick turnaround!

It helps that this is knit with super bulky yarn (I used modavera shiver) on size 10 needles.

I found out about this pattern from the electric sheep podcast and had to knit it immediately.

It was not without it’s difficulties though.
First one was when the cable became unglued from the needle.
Not a big problem. We had superglue in the house so I just glued it back together and left it to sit for a while.

It was only when it was dry and I started to use it again that I realised I had glued the needle in the wrong way.
Instead of a nice smooth needle I had a groove where a cable should fit. 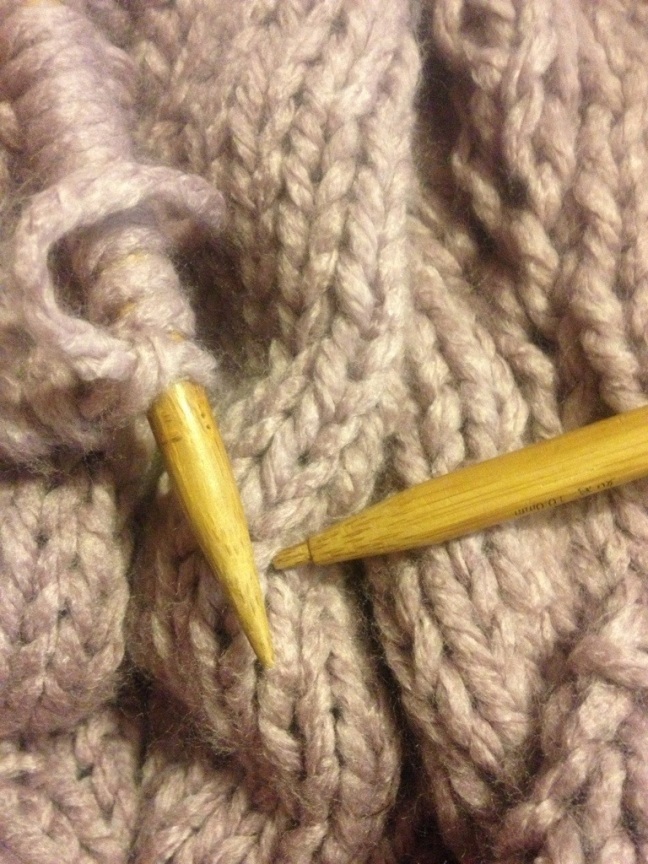 I persevered. It slowed progress a bit, but was still manageable.
Then came the sleeves.
I realised I didn’t have size 10 double pointed needles. I probably could have gone out and bought some and made my life easier, but I had a size 10 hat sized circular. It wasn’t ideal but I managed to do magic loop on it. Eventually the sleeve stretched enough to be knit from the circular no magic loop required so that turned out to be an acceptable problem.

When it came time to attach the sleeves it took me two attempts to figure out the pattern. I was meant to have put 4 stitches on holders not 3 but maths saved the day and I picked up extra stitches under the armholes and changed the yoke decreases.

So I finished a cardigan! The sleeve length is a bit awkward on me, so if I make it again I would change that, but overall I’m very pleased.
I also want to make this into a jumper pattern. By increasing the number of stitches between the pattern repeats I think it could quite easily be done.

I really need to learn how to take better photos though. 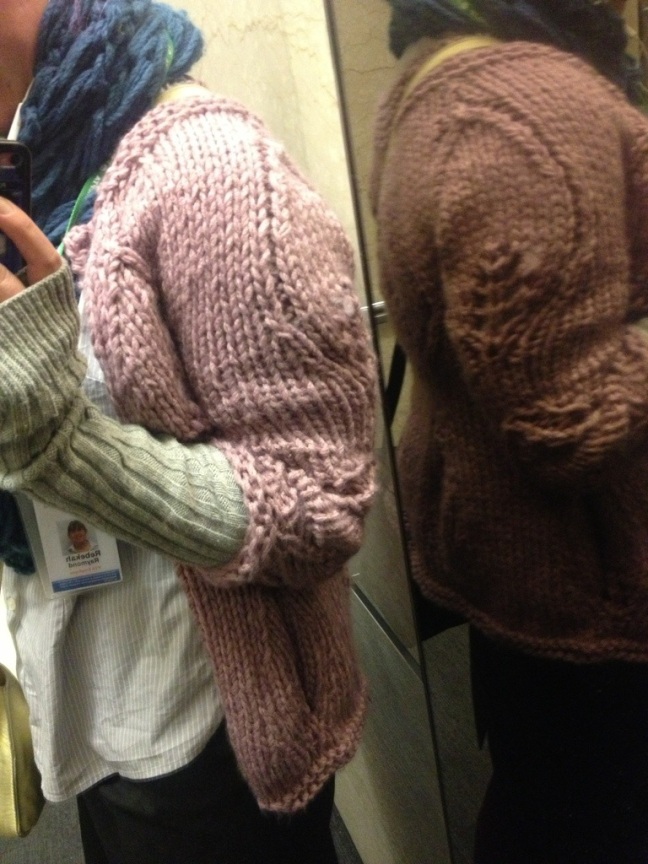 My best friend has the misfortune of supporting a football team with terrible colours.

Its also difficult to find nice options in the predominantly male clothing options (or icky t-shirts) available.
So I was thinking about this and made a drunken yarn purchase.
I found this yarn on etsy and just had to! 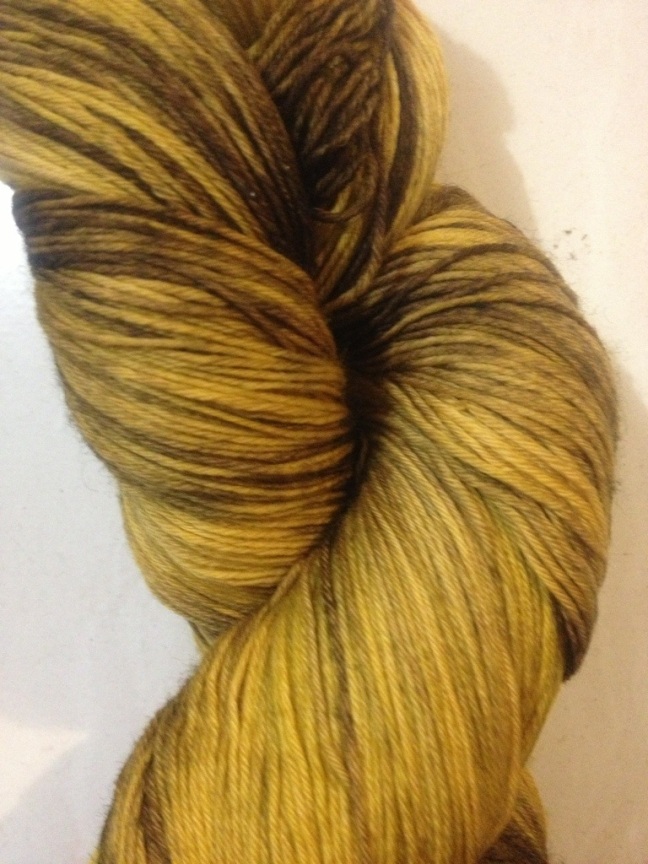 So now I’m trying to find the perfect pattern.

I’ve narrowed it down to the following. Clicking the photo will take you to it’s ravelry page. 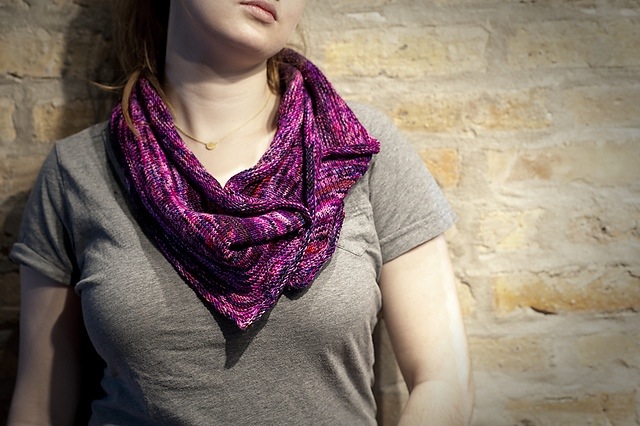 Weeble-wobble cowl.
This has interesting construction and I’m interested to see how it’s made. 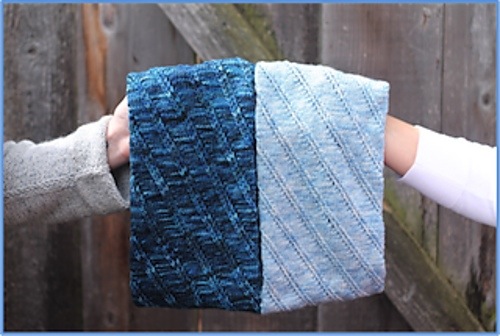 Stratosphere Cowl
This one has an interesting zig zag part but would show off the different colours really well. 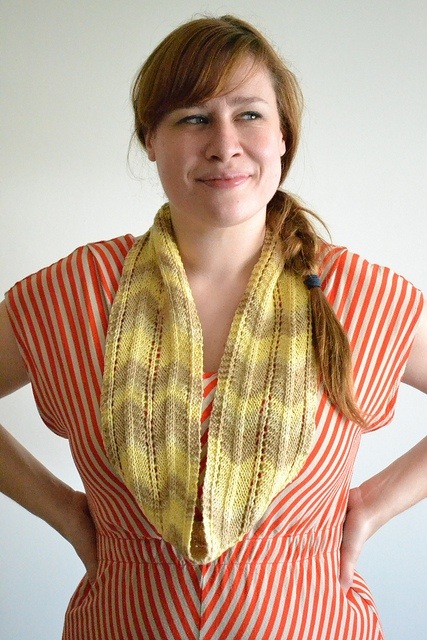 Chevron Sunshine
I’ve not done chevrons before and think that this pattern would also show off the brown & gold nicely. 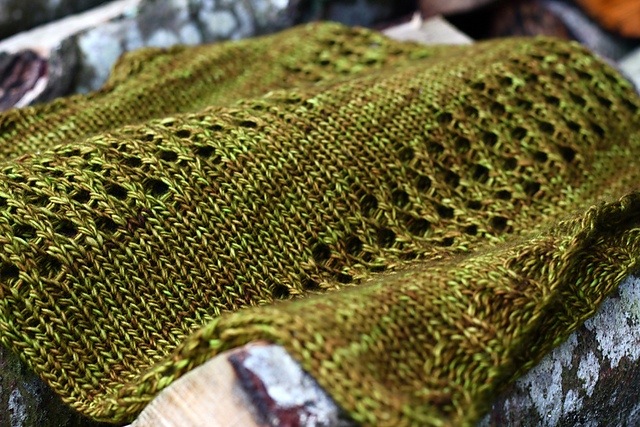 Woodstack
I really like the lace on this. It would be a bit of a challenge but I still think its elegant without being too much.

Ultimately the decision will be made by the recipient, but tell me what your favourite is.
Is there a pattern you’d recommend? Is the perfect pattern not in my shortlist?

Black and yellow stripes bore me. I’m not a Richmond fan, nor am I an extra from flight of the bumblebees.
So picking a pattern to match my house animal I thought would be difficult.

Starting where I usually start, I typed in “bee” into ravelry. (I wonder if they’ve noticed an increase in certain house animal search terms over the last few days. I also wonder how many results Manatee brings up. 9. Nine whole patterns.)

After browsing for a while, favouriting a few patterns, looking at what’s in my stash I usually gravitate towards socks.

Eventually my search screen looks a bit like this.

Hopefully one will take my fancy. In this case I found it.

I check the pattern notes, see if there are any red flags, before downloading it to my iPad and having a good read of the pattern.
It’s one has a couple of new techniques which I’m looking forward to trying out. The stitch pattern is really pretty, plus it has a provisional cast on which I haven’t tried before.

Plus I have sock yarn which is perfect! I am actively resisting not casting on immediately! But more on that tomorrow.

This exercise has become a little torturous. Now I have a gorgeous pattern which I can’t cast on until I finish my Mother’s Day Hitchhiker.
Aawwwwe.
It’s I’d why I can’t look at ravelry while I have a deadline project.

This was meant to be a post about how it’s 2 days till doctor who and I made a lovely hat in tardis blue. But then my
circular needle came loose.
And I realised I can’t keep track of a pattern.

So instead it’s a not so finished object. And now I have to buy another 6mm hat circular.
But when it’s finished………. 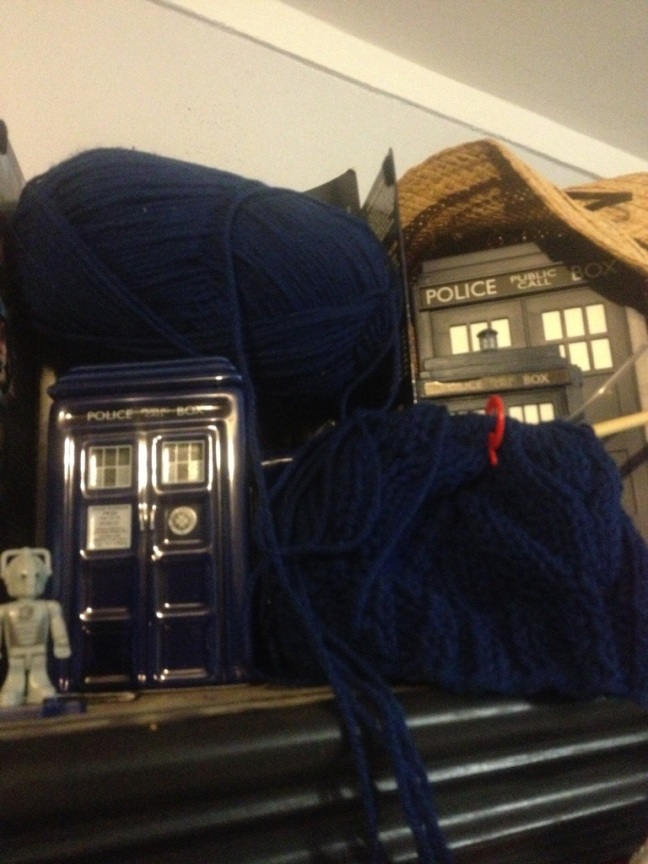 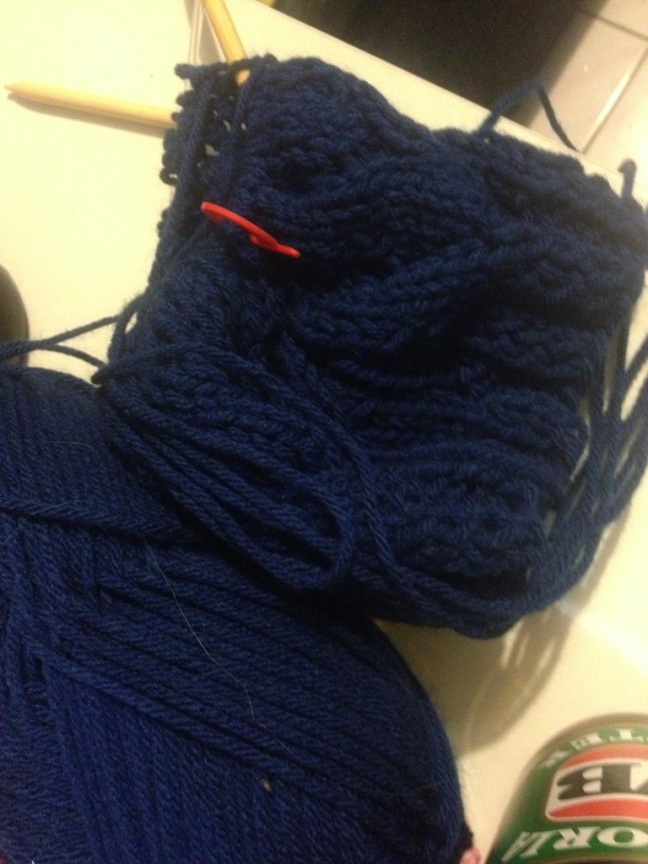 Without being all TMI, I haven’t been feeling that great for the last couple of weeks.
There were even two days last week when I didn’t even pick up my needles (cue shock horror!!!)

But I thought a cure would be something I could knock out quickly, something not too taxing on the brain, but totally cute.

So I found some yarn in my stash ( Icelandic Wool from Vera Yarn who is currently on etsy holiday but there is her shop anyway) , and a pattern called Ribbed for Her Pleasure.

I still managed to screw up what is a very easy pattern. My counting was a little wonky, but I managed to figure it out and no one except for me (and now all of you kind folk) will ever know.

But I know that you won’t tell. 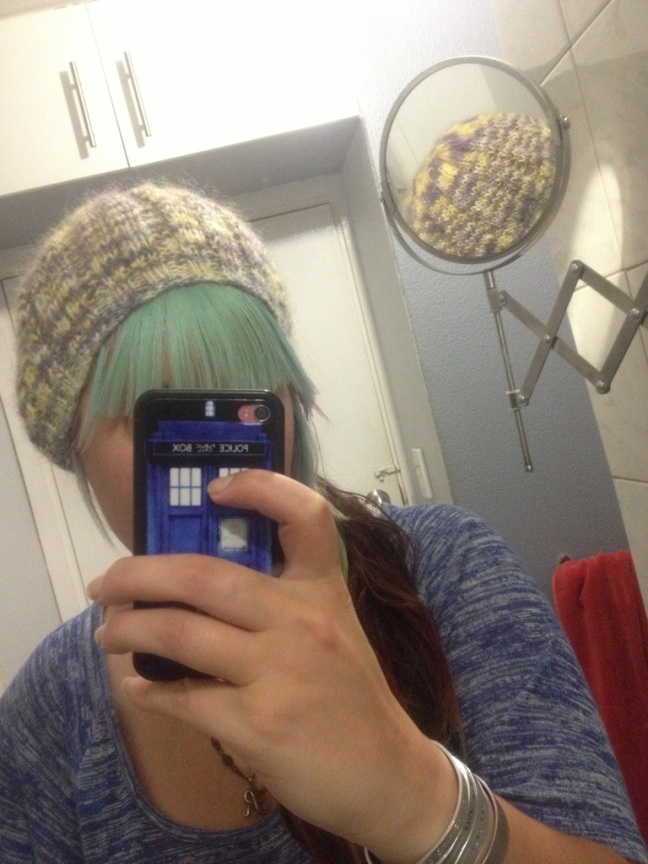 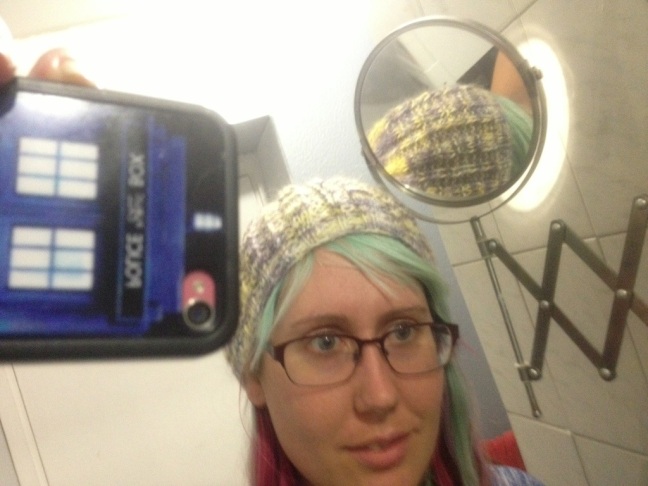