Well the weekend didn’t go entirely as planned. I didn’t get any writing done, didn’t listen to any new music, and the writing I did do I didn’t save properly.

But it was still an awesome weekend.

Went down to Dwellingup and camped near Nanga Mill in the Lane Pool area. It’s so stunningly beautiful down there.
We left later than we should have and took a detour to see Serpentine Falls. That was nice but not worth the $11 cover charge. Particularly as would have only stayed for 20 minutes.
We had lunch at the Dwellingup Pub where we watched my boys lose to the eagles. Terrible game.
Then we went to set up camp.

Had a bit of a walk before settling into camp.
Listened to the Geelong-Fremantle game on the wireless whilst I knitted and my boy read a fishing book.

Cooked up 2 kilos of mussels in a bottle of Coopers Pale Ale, but I think next time we’ll stick to the white wine.

It was good stuff. Everything tastes better in the bush.
The next mornings breakfast was a beauty as well. Bacon & egg sandwiches with some hash browns that didn’t survive the frying process but added extra crunch. Bit of BBQ sauce and they were the perfect camp brekkie.

Packed up camp and went to go fishing. I got snagged on the first cast, my boy got snagged not too long after. But it was a nice spot just a few too many logs in the water.

Check my tumblr for more pics 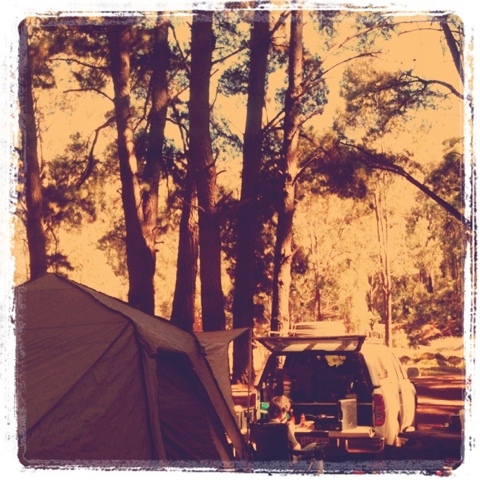