But it was so worth it… I think it will make the weekend a bit easier.

So the hash browns look good – I looked like a bit of a twat grating onion wearing goggles but in all fairness I was grating onion.
There was 2 onions grated and about a kilo of potatoes grated and then squeeze out the liquid. Added in 4 eggs and just enough (about ¾ cup) of flour just to combine it.
Then I shallow fried them in a pan – most of them was just enough to cook the potato as they’ll be fried again to reheat them, but one batch got a little brown (read black) as I was disinfecting the bathroom floor. I didn’t have time to investigate but I think there may be a leak some where. Again.

The zucchini slice is just for snacks etc. its just so easy that I make it for picnics, watching cricket, and lunches because it’s good hot or cold.

Grate a zucchini, chop an onion, chop 3 or 4 (or 5 if you like) rashers of bacon into small pieces. Put them into a bowl with a cup of cheese, a cup of self raising flour, half a cup of oil, 5 eggs, and a dash of Worcestershire sauce, salt and pepper.
Mix all together really well.
Pour into a greased up lasagne dish. I have one of those pyrex ones which works a treat.
Whack it in the oven at about 200 degrees – it should take about 30 to 40 minutes to brown up but I had it in last night at 180 degrees for just over an hour as I had other things cooking.

Dinner was eggy bread cups again.
Just had some leftover cooked chook which I added to a capsicum and tomato and added enough eggs to make an omelette consistency. Had some with multigrain bread which were awesome. And I have some leftover for lunch today.

Really looking forward to camping… should be a blast.. . 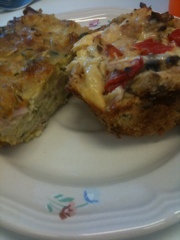 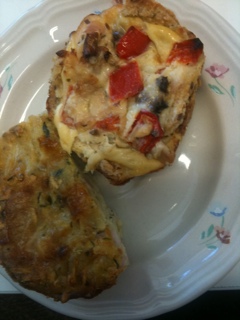