…and you will know us by the trail of dead…

I promised knitnrun4sanity that this Wednesday I would post some photos about my CD wall. But I’m going to delay this promise for a week because I went to a gig on Saturday night.

…And you will know us by the trail of dead (or Trail of Dead for short) is a band which my partner introduced me too. They’ve been to Perth before and they’ve been song of the week before, and one of their songs is in my top 20 most listened to songs. (that was in 2010 and it hasn’t changed too much.)
I think it’s pretty safe to say that I’m a fan of this band.
It’s one of the bands which my Bloke and I double up on (as in he and I both have a copy of the same CD). So I was a little shocked when he called to say that he was staying up north on his fishing trip rather than see this band.
Best Friend to the rescue!!

Having never heard this band before (I’ve obviously failed as a friend by not previously lending her any of the 4 albums we own), I’m pleased to report she had an awesome time.
She was the one who convinced me to get a photo with the lead singer after the gig. Unfortunately I only remembered last night (way too late) that my camera has a flash which you have to pop up for it to work. So two of them were just darkness. But the third I was able to save with the magic of photo editing and over exposure.

We were impressed with the support art Sincerely, Grizzly so we both bought their EP. The band were at the merch stand so we chatted to them for a while. The lead singer was a massive Doctor Who fan which was very cool.
The only pic I have of that is Midnite Moose looking mid “woo!”, which is for her eyes only.

Sincerely, Grizzly were definitely influenced by Trail of Dead, which made them a pretty good support act. I would definitely see them if they came to Perth again.

Trail of Dead played Source Tags & Codes in full before skipping their scheduled break and playing a set from the other albums.
Overall it was an awesome show. I got home with my ears ringing, and a grin from ear to ear. That’s always a sign of a great gig, and a great night out.

I always feel lazy choosing the first song from an album as my song of the week, or for my favourite song.
I feel like I haven’t done my due diligence, like people will judge me because I haven’t really listened to the whole album.
Of course this is absolutely silly.
Sometimes the albums first song is actually the strongest, the best, the one that I like the most, the one that sticks out, whatever subjective measurement I feel like using.

I have, of course, listened to the whole of this album. I think it’s a cracker.

And this is the first track.

…and you will know us by the trail of dead… was absolutely epic on Sunday night.
Words can’t even begin to describe it. That moment when you hear the riff to one of your all-time favourite songs, surrounded by people who love them aswell.
I may have screamed a little.

Between that on Sunday night and the football on Friday night I slept.
And slept.
Like Rip Van Winkle type of sleep.
I’m still not 100% but I’m back at work. I lasted at work yesterday for a grand total of 45 minutes of everyone telling me that I looked awful so I went home and slept some more (and watched some bad television).

Lets hope the new rapture album, a spotlight catalogue, project runway Australia finale, and a bowl of mac and cheese hits the spot.
Failing that a hot bath and some hugs from my man (or my dolls which now live in my clean spare bedroom). 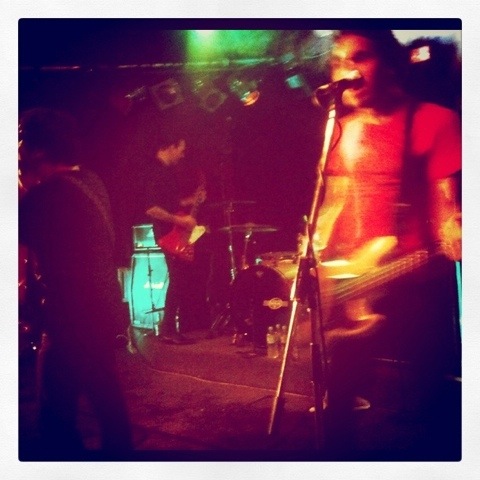 Another weekend has ended but no photographs to show for it!

But I made a beautiful polka dot skirt, put together a flat pack desk, spent some quality time with my best friend and her new squeeze, had a father day lunch with the in-laws, watched my football team avoid last place, and went and saw Wicked! the musical.

I think I’m back at work for a break.

Wicked! was absolutely fantastic (or wonderful!). I know i’m a bit late to the game but I have always loved musical theatre. I was always involved in musical theatre in High School and it brought back a whole heap of memories.

I would have loved to have been at Port Adelaide’s first game at Adelaide Oval, but tickets were too expensive ($700+ from Perth to Adelaide return!), but we scraped our third win for the season and avoided last place.

And I’ll do a full post on my new skirt this week. I can’t believe I wore it non-stop all weekend and not one single photo.

So overall a very good weekend, and I can now start looking forward to this weekend (..And You Will Know Us By The Trail Of Dead… excitement!!!)

Wednesday afternoon just went well.
Wolf Parade – Expo 86 arrived (finally) after being lost in the mail.
So that got listened to about 3 times on repeat, before listening to their first album again.
First impressions, it’s good.
As good as their first. END_OF_DOCUMENT_TOKEN_TO_BE_REPLACED

Ive been a little splurgy over the last few week, and a few new albums from artists that I follow have come out.
So for my new listening please this week I have:

And you will know us by the trail of dead – Tao of the dead
M Ward – Hold Time
The Morning Benders – Big Echo
The Tallest Man on Earth – Sometimes the blues is just a passing bird
The Go! Team – Rolling Blackouts
The Silents – Sun A Buzz
She & Him – Volume One
She & Him – Volume Two
New Rules for Boats – The Skips On My Record
Cold War Kids – Mine Is Yours
Au Revoir Simone – Still Night, Still Light
The Decemberists – The King Is Dead

really in a trail of dead mood today – particularly after they’ve just announced new album set for release Feb 7.
i kinda can’t listen to this song without the prelude ‘ode to isis’ before it.
will you smile again has an awesome start – it was my ringtone for months
but ode to isis just contains everything i love about trail of dead, string orchestras, choirs, (doctor who soundtracks)
and then there’s the first time you listen to the song with headphones, as opposed to on a stereo, and you hear the super creepy
and, you, will, know, us, by, the, trail, of, dead
aargggh!!!!!
END_OF_DOCUMENT_TOKEN_TO_BE_REPLACED