March 2008, we were both at what was then our local pub for their annual beach party, which is where a pub 30km from the ocean trucks in sand and a volleyball net and calls itself a beach. We were both there with friends but snuck away to watch the cricket.

We started talking and we haven’t really stopped.

Together we’ve survived The Great Flood, murder scenes, and laundromats (what a month that was). We’ve driven 6000km to Adelaide and back together.

We have collected more than enough stubby holders, but still collect more. And almost every year we use those stubby holders to figure out just how long we’ve been together.

I’ve changed jobs and he’s changed jobs. We’ve argued and we’ve made up. We’ve seen the ugly sides of each other but it doesn’t matter.

He likes marmite and I’m a Vegemite girl.
He reads comics not books.
He enjoys hip hop and I most definitely do not.
We debate things heatedly even when we’re both on the same side.
He finds my clumsiness amusing.
He doesn’t like Doctor Who (!) but he’ll buy me a remote control dalek.
He says random numbers when I’m casting on and counting carefully.
He snores very loudly.
He can be as stubborn as I am.
He supports Adelaide and I support cross town rivals Port Adelaide.
He supports Chicago Bears and I support cross town rivals Minnesota Vikings (I don’t even know how that one happened).

But he sleeps on the couch when I’m sick so he can take care of me. And I miss his snoring when he does.
He goes to the shops to buy me UTI medication when I just can’t face moving.
He does all the laundry and never puts my jeans in the dryer.
He knows I mean it when I say I don’t want presents for my birthday, but he buys me a remote control dalek anyway.
He knows when I need alone time and goes on fishing trips.

Together we have made a very happy and content life.
I am indeed a very lucky girl.
Did I mention the remote control dalek??! 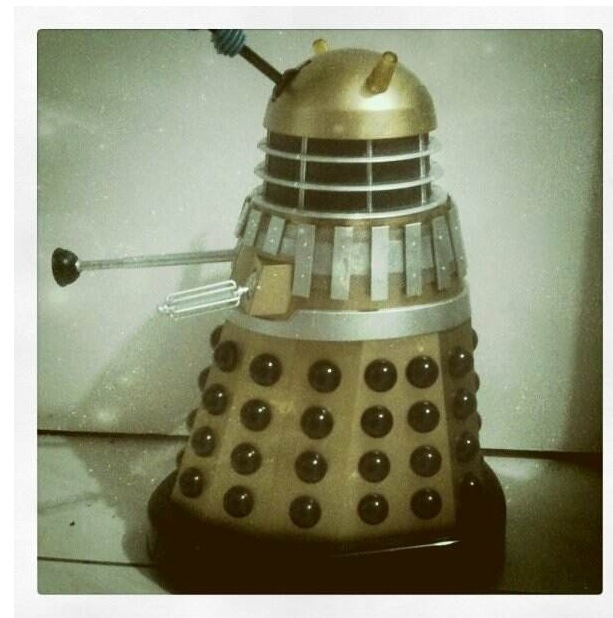 It was with his persuasion that I took up knitting (and I think we know how that suggestion went!)
Say hello to my sock model.

He shall be known as HeWhoFishes.

If knitting is my hobby, fishing is his.

He owns more fishing books than I do knitting books (not counting magazines. But he probably has just as many of them too!)

I’ll be on the couch knitting and he’ll be beside me rigging up his line, practicing knots, or researching the next great fishing spot.

(Look at me having fishing stuff in my photos – If I was a fish, I’d eat these)

I think it’s a pretty good name for the man in my life who doesn’t want his name on the Internet. And as classy as ‘Live-in Gentleman Lover’ sounds, it’s a bit of a mouthful.

He’s a special man, and I am incredibly grateful that I get to spend my life with him.