9 levels of German on Duolingo learnt

2 kittens became cats (look at how much Tina’s grown!)

~17 finished objects knitted or crocheted
2 months of not writing in my daily ‘good things’ journal which kept track of finished items
1 resolution to keep better track of projects next year.
1 Frankie diary to help keep that resolution

1 amazing awesome care package received
16 Christmas Cards sent along with various other care packages and letters throughout the year.

28 cuffs stamped (plus 1 wallet and 3 necklaces)
19 etsy sales
5 patterns published on Ravelry
1451 unique pattern downloads!!! (seriously that is awesome! Thanks so much guys!!)
skeins of yarn added to stash
9 skeins of yarn dyed

9 of my favourite selfies all with slightly different hair!!

I was bored. All interesting crafty stories seem to start that way.

I was bored and so I decided to experiment with my metal stamps. A while ago the lovely Lisa (from teaandcraft and co-founder of the green hair crafty ladies of Perth) borrowed my stamping set to make some leather key chain charms.

It worked pretty well and so after impulse buying a cheap but mostly boring white wallet ($2 – cotton on) I wanted to experiment.

I probably should have researched good ways to ink the letters before I jumped in and used permanent marker. But it’s a rustic sort of look (well as rustic as you get with fake vinyl and a Mass Effect inspired quote about dating a fictional race of space aliens).

I’m definitely now on the look out for other stamping opportunities that are already in my closet.

I took a break from playing Dragon Age and I stamped this.

And then I took a break from listening to Florence + The Machine and made this.

And then I stopped reading Stitch and Bitch and made this.

What else should I stamp???

This week – I can’t even begin.

There’s just been so much going on.

If you want a better articulated version of my week visit TeaTimeTails.

The one thing that’s kept me slightly sane has been the prospect of a long weekend (which means football!!!) and the sage advice from the latest Tina Fey produced TV show ‘Unbreakable Kimmy Schmidt’.

Like nearly every other person who’s written about this series on the Internet, I watched it all in one night and have a really strong desire to watch it all again.

If you don’t live in the US, or pretend you live in 90210 like we do to watch US Netflix you may have not have seen Unbreakable Kimmy Schmidt but the basic premise is this. After 15 years of living in a hole with a cult leader, they’re rescued and instead of returning her life before, Kimmy takes her Unbreakable spirit and starts a life in New York.

It’s not all smooth sailing. It is a television show and there is a narrative to drive. Naturally there’s conflict and hard times and Kimmys strategy is one that I’ve employed this week.

“You can handle anything for 10 seconds.”

That’s been this week. 10 seconds at a time.

The theme song is also catchy as anything. So that absolutely had to go on a cuff. With a little 10 as a secret reminder to take things 10 seconds at a time.

But if you can watch Unbreakable Kimmy Schmidt – do so immediately!

Something a bit like resolutions but I prefer to call them goals.

Last year got a bit waylaid with the whole ‘spinal nerve damage’ thing, so I’ve made this year a little bit more achievable.

I think this should be simple and achieveable.

I feel like I’ve done everything but still done nothing in the last month or so.

I don’t think I’ve finished anything yarn related. My spinning wheel still isn’t set up although I have bought fibre for it.
I am working on my own hat pattern though. I’ve frogged it twice but it’s starting to look pretty good.

I bought some new glasses from firmoo.com. I have worn glasses since I was 8 and only now have I discovered the wonders of buying glasses online.
My last pair of glasses cost me $375 in out of pocket expenses.
I got three pairs for $130 from firmoo! I now have a pair of prescription polarised sunglasses. I’m not sure I’ve ever had a pair of prescription sunglasses before. It was also too expensive. So I’m pretty psyched that I now have 4 pairs of glasses with the same prescription. I’ve had just one pair of glasses for 3 years which I’ve been terrified of breaking or losing, so this is a really cool feeling.
Plus they’re really stylish and cool.

We have booked flights, accomodation and tickets for the Boxing Day Test Match!!! Our credit card is slightly maxxed but its worth it. I feel it’s been ages since we went away more than 3 hours from the city.

I’ve sent some things out in the post and got some things back in the post. Including a super awesome postcard from twitter lovely Megan and a swap package full of lovely goodies as part of the selfish knitters winter wonderland swap. I quite like putting something in the post and knowing that it’s probably going to brighten someone’s day.

I’ve been reading plenty. I actually paid money for the digital copy of Dragonfly in Amber because I finished Cross Stitch and was still awake so clearly I needed to read the second one immediately.
This is also the difficulty with December. I’m not sure where it all started, but Christmas Lists have always been a ‘thang’ in my family.
Mostly mine consisted of books. But it always meant that if I put something on my Christmas List then I couldn’t buy it until after Christmas.

Well that’s what’s happened again. I have a Christmas list which has this book on it, so I don’t want to order it, but I need to read it straight away. Yes I know – first world problems.

I’ve also had another needle in my neck. Yay! But I am feeling the best I have in a while. My twitter nagger Raves has been keeping me on track and making sure I go to the pool. I wasn’t a happy panda when I went on Saturday. All these people were there and the walking lanes were full. At least after work is mostly small children yelling. I think I put up with small children yelling, more than other people in MY lane. But I’ve felt better for going.

Oh well. Here are some photos from the last month or so.

I’ve added two new cuffs to my shop.
I’m trying to have more pre-made examples in my shop, which of course means making more for myself! All cuffs will continue to be made-to-order, but with more specific examples.

Before I started making cuffs for myself I had bought a bad wolf one. I ended up giving it to a friend one night at the pub.I figured that he wanted me to make him one, and rather than wait I just gave him the one I was wearing and made one for myself later.
(If you’re a doctor who fan the reference should be pretty self explanatory. If you’re not a doctor who fan – it’s something to do with doctor who!!!) 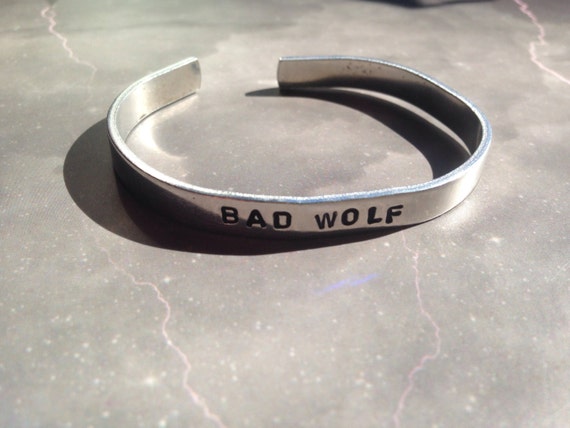 I also wanted to experiment with the new calligraphy font that I’ve got. So I looked through my notebook of other peoples words and settled on Bulletproof.
It’s one of the songs on my ‘ladies who kick serious ass’ playlist.(We all have one don’t we?) 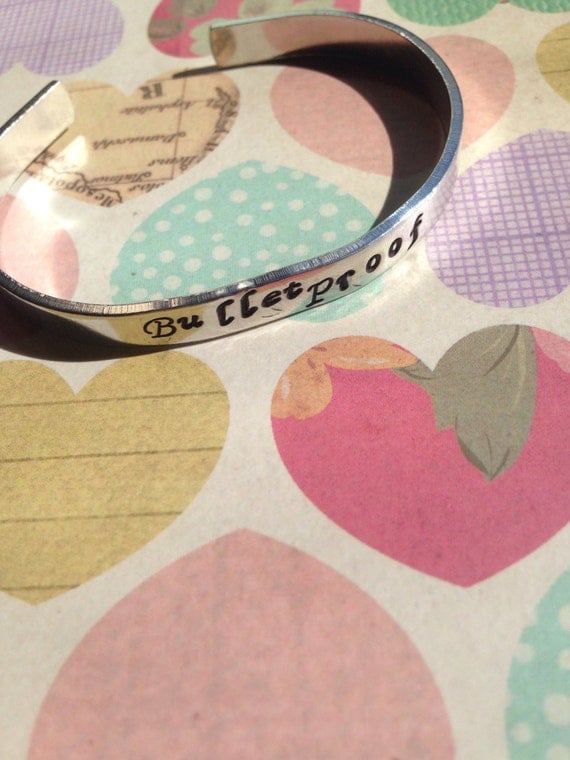 (Don’t forget all my blog friends can get free shipping with coupon code “PARTTIMECRAFTER”.)

Now if only the gifs came to life and we could put them on our walls and then everywhere would be tumblr.

Also a quick update on the Liz Lemon hat. It is now pompomless. The pompom decided that it no longer wanted to exist and so unravelled itself in a fit of rage.

1 – PlayStation 3 which decided to not read discs any more
9 – hours to transfer all our data off our old PS3 to the new one
1 – heart palpitation when Hewhofishes suggested I could ‘just start over’ in Skyrim
3 – the number of times Hewhofishes pointed a laser pointer from the tv couch to the kitchen couch to annoy me whilst waiting for the data transfer.
1.5 – books in the Grisha series read despite such laser pointer intrusions

1 – old but new to me china cabinet was delivered
7 – years my 21st birthday china waited before being unpacked
4 – years my tea cup collection has been waiting for a home that wasn’t constantly under threat of being knocked over.

but by far the biggest and most important number of the weekend
100 – the age of my Great-Nan who celebrated her birthday on Saturday.
6 children, 19 grand-children, 26 great-grand children (me!), and 2 great-great-grandchildren

(Numbers are from my memory and are approximate. It may have been more than 12 episodes of Bobs Burger we watched.)

Out in this mail this week went several little packages.

Some will be expected and some won’t so I hope they brighten up the recipients day.

I’ve also pimped out mum with a pair of earrings.

Made a bracelet for an alcoholic dinosaur.

A bracelet for a strong, smart, sensual woman.

And a couple of rings for me. Just because I can.