For when you can’t stand anymore takeaway, but are so tired you put the frozen stock (in the foil packet) in the microwave to defrost.

Top tip! Foil packets can burst into flames when you put them in the microwave. Fortunately they do make crackling noises before they burst into flames. Otherwise this may be a very different type of blog post.

Fortunately I’m not being nominated for a Darwin Award, but sharing a soup recipe.

Add stock, frozen peas, whatever herbs sound good at the time to a pan.
Cook.
Blend.

Check to see if there’s any ham or bacon in the freezer. Nope.
Check for cream or Greek yogurt. Nope.

Eat it anyway.
It’s not that bad. 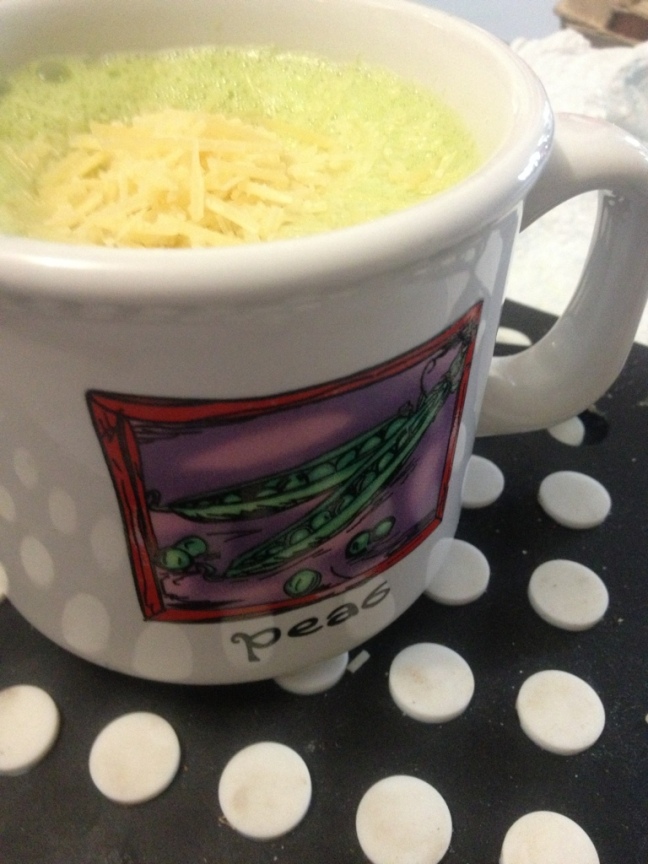 Well that’s how I made this batch of pumpkin soup.

Those four ingredients went into a saucepan until they boiled up and were ready to blitz using a food processor (or equivalent). Adding salt and pepper naturally. And some fresh parsley at the end (or whatever you have growing).

Like so many soups these are the important ingredients.

Although if you wanted to use more than 4 ingredients you could start with some spring onions.
Maybe add some nutmeg or ginger.
Bulk it up with some potatoes.

And go easy on the cream. Don’t just add the whole 500m carton just because you didn’t want to waste it.
Not a good idea.

I know I’ve got this far without addressing what you’re probably thinking. Pumpkin and Apple in a soup?
But trust me. It works well.
I used royal gala apples and it just adds a bit of sweetness and makes it a little special. 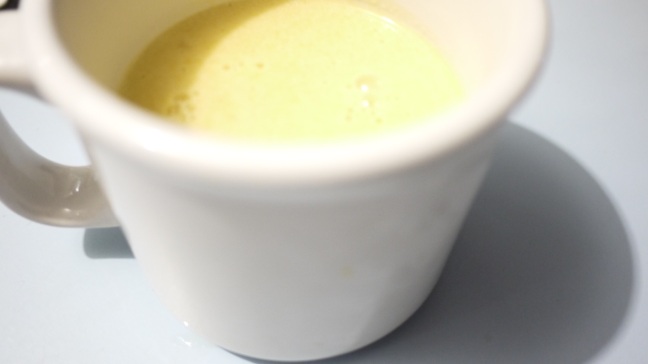 Call me a saucy minx, but I have a strategy when it comes to making soup.
Well I have to. Whenever I suggest soup for dinner, the manly half of the relationship kicks up a fuss “soup for dinner?? That’s not going to be enough. I’m a manly man, I need man-food!”
Well maybe not those exact words, but that’s how I hear it.

Well my secret phrase is “I’ll make you something else in a minute”.
By the time he finishes his soup, he’ll have warm soup belly, be all full up, and forget that you were meant to cook them something else.

Of course if you suggest a manly soup the men-folk will be satisfied that their masculinity isn’t compromised.

Last week’s minestrone (recipe from not all tea and scones was very manly. You can’t get more masculine than chunks of steak, and potato.

However after looking through my bare cupboards (I’ll do the food shopping this week I swear), all I could come up with was potato soup. Not even potato with steak, just plain potato.

So I pulled out the whole “I’ll make you something else if you’re still hungry”. Sure enough, after a hearty bowl of soup I had a very content man with warm soup belly.

(of course I’m not the first to discuss manly soup)

The actual soup was really basic. It took what I had in the cupboard, threw it into a pot, and boiled until it all squishy and ready to be blended.
You really could use whatever is on hand, but this is what I used.

The Recipe
Brown the onion and garlic in olive oil.
Once brown add the coriander and cumin.
Add the grated carrot and let that soften.
Add the potatoes, the stock, and enough water to just cover it.

Bring to the boil and then leave to simmer until the potatoes fall apart with a fork.
Add the peas and bring back to the boil.
Turn off the heat and leave until it’s cool enough to blend.

Serve with greek yoghurt and cheese. 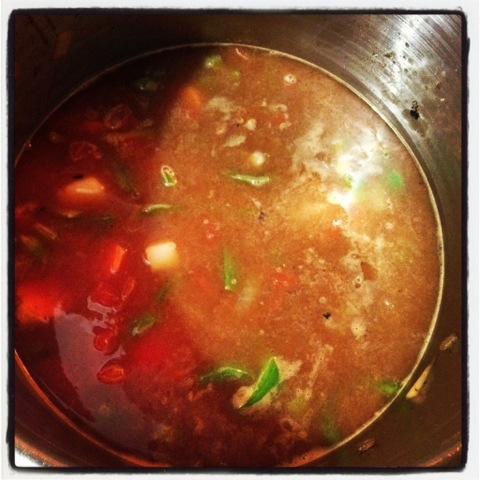 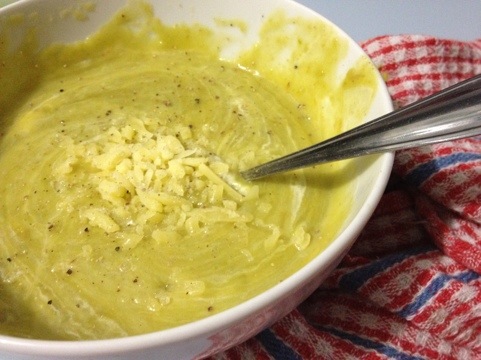 Mondays can either go one of two ways.
Either I get home from work completely spent, uninspired, and want nothing more to collapse on the couch watching Project Runway.
Or I get home inspired, ready to clean the house, cook dinner, finish knitting projects that I was previously bored of, and take over the world.

Last night was the latter.
After an unenthusiastic day at work, I came home, did the grocery shopping, did a vague meal plan for the rest of the week, paid some bills, started the head of another minion, and cooked a two course meal. I even did the dishes afterwards (a rarity) so there isn’t washing up left over.

I borrowed a recipe from the blog of Food On Paper. It’s a delicious blog with food photography which I aspire to.
She posted this Mint, Pea, and Yoghurt soup a while back and I squirreled it away for a night like last night.

I was planning on trying to recreate the roasted lamb pasta which I had at the Royal not so long ago. So into the oven went a little lamb roast and some diced potatoes, carrots, and parsnip.

As I knew dinner was going to be late (roasting in the oven takes time) I thought I’d make a soup.
I’m always a bit ravenous when I get home and a quick soup seemed just the ticket.

The only variation was I didn’t have any mint! It’s a total disaster to not have an ingredient which is in the title, but it still worked. It would have worked better with some mint, but the only mint I had in the house was chocolate mint drinking powder. I decided against putting that in.

I served it up with the prescribed dollop of greek yoghurt which really made it something special. Accompanying it on the plate was some (store bought!) scones which had gone in the sandwich press to melt the parmesan cheese over the top.

But the lamb was in the oven so once that was cooked it was rested until it was able to be sliced.
Into a hot pan went some garlic olive oil closely followed by some chopped onion. Then went the sliced lamb and the roasted vegetables.
On top of that went a bottle of passata, (I thought it was the closest match for what I had tasted at the royal), and then some water which rinsed out the jar.
That then came to the boil and then simmered until the pasta was cooked.

For the pasta, I used fresh lasagne sheets which I tore into rustic looking sheets.
I know why I don’t always use fresh pasta (it involves going to the shops more often) but oh how I love fresh pasta.
One of my dreams for when I have a bigger kitchen is a pasta maker.

Delicious! Even though he wasn’t hungry, Mr Sparklesness went back for seconds.
It’s a lamb roast, in a bowl, hugged by pasta. 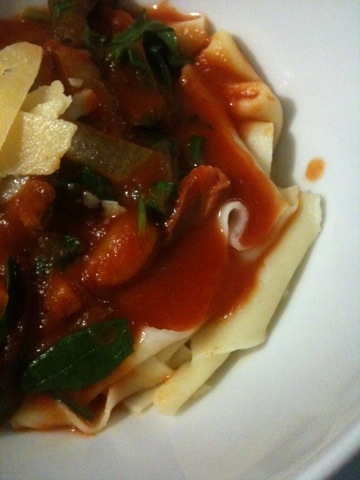 With the leftover tinned tomatoes from the Chicken Parma the other night, a soup was made.

I really hate throwing out food. I am so lucky and grateful to be able to live the style I do, I don’t want to waste the food that I’ve brought.

So into a pan went the tinned tomatoes, some beef stock, and some worcestershire sauce, salt & pepper (for good measure).
That boiled and then simmered for about 10 minutes.
It then became my lunch today.
Simple but I wish I had some cheese to top it off with.

With a spot of lunchtime reading, this Monday might just work out.

We had a sleep in.

J lost his voice and tried not to speak all day.

Did our washing at a laundromat, while we’re waiting for our washing machine to get fixed.

I finished off a hat that I started, but have plans to frog it.

I made chicken and corn soup (with a trip to the shops in the process).

I fixed our internet connection.

I made cheese and bacon muffins

We went to the casino for a silent dinner, watched Mark Webber lose pole position.

Went home and watched some tele and fell asleep.

Well I have one crook little cookie at home at the moment.
His temperature is up, he’s going between hot and cold, and all his muscles ache.

So what was needed was some soup.

I’m going through a massive cauliflower phase at the moment. I absolutely love the stuff.
So I’m making sure I buy some whenever I go to the supermarket.

So when J called me on his way home from work (he had to work late yesterday when he was feeling ill) and said that he was feeling terrible but really hungry I had to get dinner on straight away.

A quick search on taste.com.au revealed the cauliflower soup that I made last time (no thanks).
But I recalled a conversation with a lovely checkout lady from Coles, who basically described the soup recipe here

I didn’t have leeks so instead I fried a brown onion.
Then I added the potato and cauliflower so that could boil away in chicken stock.

Once it was cooked, I mashed it (as J was asleep on the couch and the stick blender would have woken him) and added cheese and bacon (because everything is better with cheese and bacon).

I think mashing it meant that it was chunkier, which was nice.

Then topped with some fresh chives from the garden.

It was so delicious I went back for seconds.

After my boy fell back asleep on the couch, I cast on for a cowl that I’m making for his sister, and knitted a few rows of that. The lace pattern didn’t really turn out though so I’ve abandoned the lace in favour of the rib that makes up the lace pattern.

It was almost like having a night to myself.

And it makes for some good work lunches aswell