We have a new pizza place. Finally.

Our last pizza place (Corleones) won our hearts by not only having good pizza, but by ‘delivering’ my drunk Mister home after Melbourne Cup one year. He ordered two pizzas for delivery, and then asked if they were going his way. (Well in his inebriated state I’m sure it wasn’t quite that elegant, but as I didn’t have a car at the time, and there are never any taxis in Perth, especially on Melbourne Cup day coming home from Ascot, I was just grateful that he got home safe.)
But unfortunately they closed down a couple of years ago which left us without a pizza place.
We’re not short of pizza places in the area, but we are short of pizza places which make good tasty pizzas.

Until now.
Crust pizza have just opened in Mt Lawley! Last Monday they opened their doors, and Tuesday we dined. Albeit at home.

I had a BBQ chicken calzone (which was super yummy). The Mister had BBQ chicken pizza pockets (sensing a theme?), and we both shared a Philly Steak.
It tasted like it was freshly made with fresh ingrediants (I’m assuming because it was). But it’s not something that you can always take for granted. Particularly compared with some of the tripe which is served up in the area (Leo’s I’m looking at you.)
I was also impressed with the selections. The Mister had a shortlist of about 8 pizzas, which is something that never happens. He can be a picky customer.
And ordering online was a breeze. I’m inclined to like anything which means I don’t have to get cash out, or have cash on me.
I believe I’m gushing. But it’s definitely our new preferred pizza place. 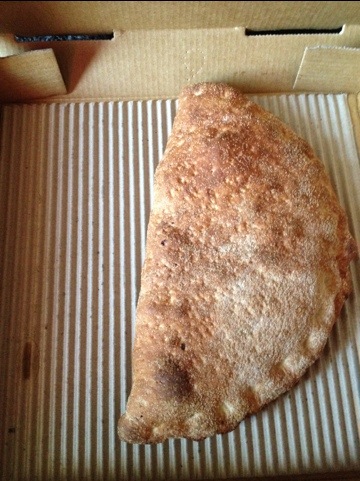 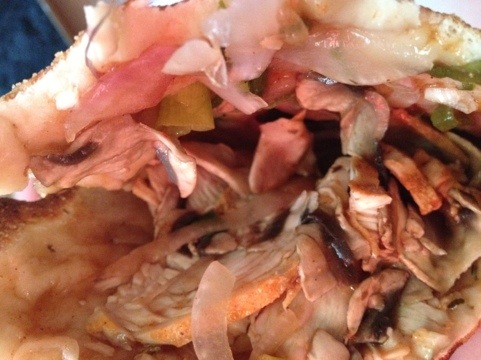 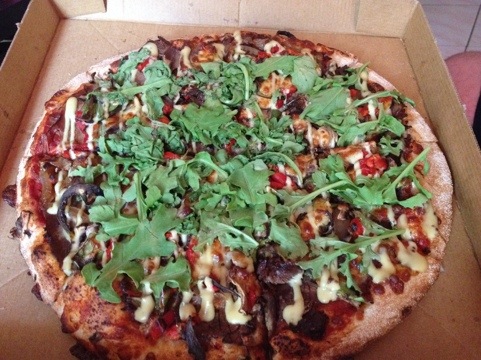 A night at home with mad monkey.

I had a really late lunch (2:30!) so I wasn’t really hungry, and feeling very lazy.
So we ordered in. I had a Greek salad,with a garlic And rosemary pizza crust for carbs.
Mr Polka-dots had a Tom-Tom which isbacon, mushroom, creamy sauce with fettucine.

The salad was really fresh. It absolutely hit the spot. And I may have sneaked a couple of forks of pasta (and one sneaky dip of pasta on top of the pizza. One of the joys of eating at home). The pasta was pretty good. Nothing I couldn’t have made myself, but I didn’t want to cook now did I.

I have this weird thing about not watching sport whilst i eat (I always spill it, or end up not eating, or generally don’t enjoy it as much) so we always turn off whatever sport we’re watching and watch some entertainment.

Mister had an RDO today so he was home when I got home and was watching The Hollowmen. (Before I reminded him that there was a Chicago game taped and he promptly started watching that.) So once dinner arrived on went The Hollowmen again.
It’s an Australian comedy about Aussie politics. A bit like Yes Minister but dryer. It has some laugh out loud moments in this household, but it only lasted two seasons.

It revolves around the team behind the Prime Minister and the way they spin and make decisions for the country.
Here’s a clip, but I’m not sure it’s a program that really translates.
But then this household also loves Parks and Recreation which runs a similar premise.

It’s cricket season. Yay! I love cricket. For those un-aussies among us cricket is like baseball except over 5 days. 5 days of sport is glorious.

So the Sheffield Shield is our local competition, and free entry means we can catch a couple of hours after work.
After the games play (we’re kinda losing on day two) we starting heading back home but it was peak hour and annoying, so we stopped in East Perth for dinner.

It was close and it had started raining so we stopped at local Italian place Antico Caffe. Tempted by the sign ‘free beer with pizza’.

The waitress was adorable, and very attentive.

The food took a little while to come out (exactly the time it took for me to drink a glass of wine), but when it came out it was pretty delicious.

I had a pizza with chickem, potato, and bacon which went down a treat.
But I should have ordered what the Mister had, chicken stuffed with prawns in a white wine sauce with potatos.
Which was “like his three favourite meals combined to make one super meal”.
The free beer (an italian beer we’d never heard of) wasn’t too bad to begin with, but the end verdict was we’ll pay for beer next time.

We had probably the best seats in the house, as we were looking outside to the intersection and all the people who were stuck in the rain. Including a pizza delivery guy who was supremely lost.
We watched as he crossed the street three times, asked a random stranger where he was, and took at least 18 minutes between us noticing him and him driving away again.

I can never eat a full pizza so I’m always happy when I can doggy bag it (it made a great lunch).
So we left on a bit of a high until we realised that we had a parking fine.
Silly me was trying to escape the rain and didn’t put enough money in the machine.

So it ended up being an expensive dinner, but it wasn’t as bad as all the other reviews on Urbanspoon have made it out to be.

The menu definitely had enough things to try that we wouldn’t mind going back. 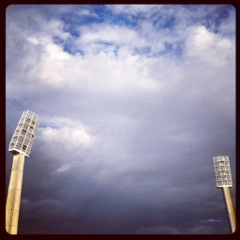 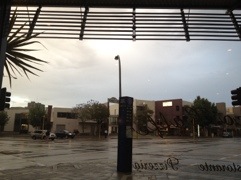 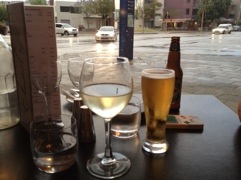 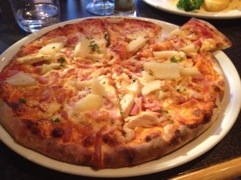 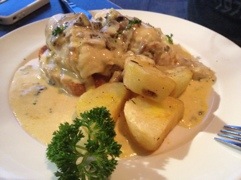 On a sunny Sunday arvo we went to Freo, with the hope of picking up some NFl or MLB gear from a stall in the markets.

They didn’t have any of our teams but we did have a nice lunch at Portorossa.

I only wanted a salad, but ended up with a veal sandwich.
It was delectable. There’s nothing worse than chewy meat in a sandwich, but I’m please to say this was nothing of the sort.

The Mister had a meat lovers pizza. Nothing too elaborate. It was a pizza.

But it was a beautiful day in freo, even if someone (me) was feeling cranky and overwhelmed by birds (slight phobia) and crowds (too polite).

Definitely return to sample more of their menu. And I liked that all 4 wait staff said ‘have a nice day’ when we left. 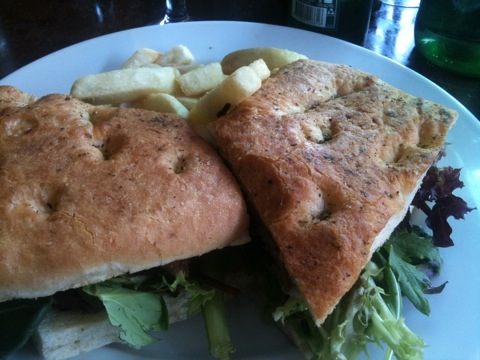 On a hungover Saturday, the Mr dragged me out to dinner and away from my tracky daks and tea (hangover essentials).
The promise was pasta and pizza. The place was Piccos. I didn’t even know where it was, even though it’s just 2 minutes up the road. Turns out I used to run past it all the time.

The location isn’t idyllic, but the attention to detail inside more than makes up for the location.

From the handwritten menu on the wall, to the table numbers, to the umbrella stand, every little detail had been thought of and executed beautifully.

We were unprepared as usual, so it was water only for the table but we’ll know for next time (and there will be a next time).

After the promise of pizza and pasta, we had to choose. The pizza menu had so many delicious items, but I couldn’t go past the bbq chicken, with capsicum and onion. It’s one of my favourites.

Mr Polka-dots&Sparkles, had the linguini cabonara.
The food was good, just what I felt like. And we were able to take the rest of the pizza home (which is great because I can never eat a full pizza).

But looking around at all the different foods around us, next time I think we’ll be a little bit more adventurous.

I really wanted to take photos of everything, the whole place was just so cute. 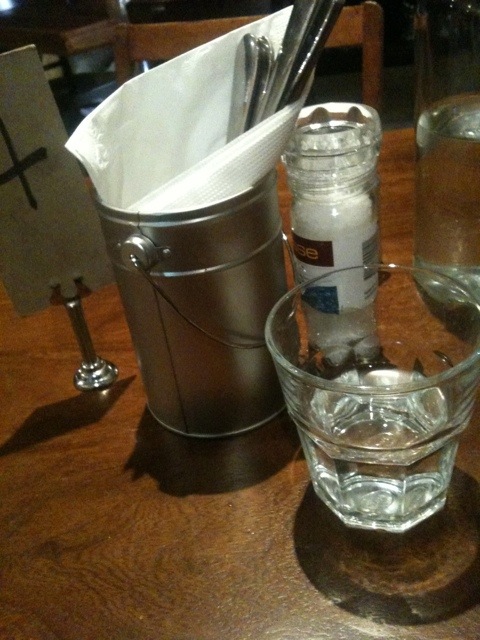 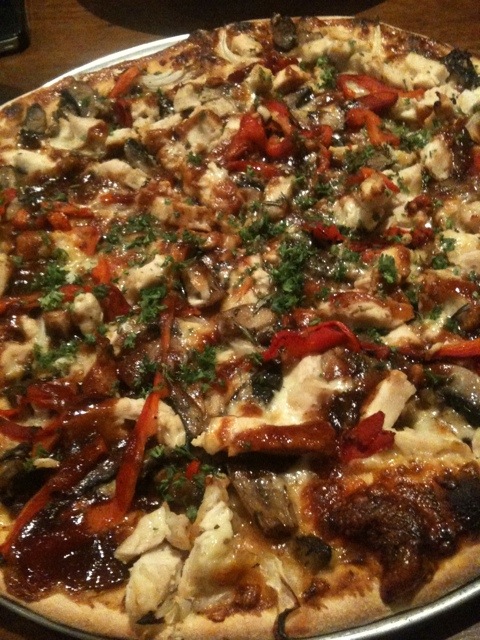 I love that song.

And I love pizza, particularly when it’s made for me. I even had 34 cents of olives to keep me happy.
It’s a bit of a pain that the Mister won’t eat olives, but he loves me enough to put them on my pizzas because I love them. I have been known to polish off a tin of olives before they got into whatever I’m cooking.

So I’m afraid I don’t know what was in these pizzas. The only technique was “a little bit of this, and then a bit more, and then some more until it looked good”.

I was busy catching up on my EA sports work out challenge. Being unwell I missed 3 workouts so I did them all at once. I now have the program down to a pretty decent cost per use (well under the cost of a gym membership).
I love my body. It does most things I ask it to, even if it does creak and crack. I’m just acutely aware that we’ve both put on a bit of relationship weight. Probably because we’re eating so well!
So I’m trying to move a bit more, eat a bit better, and drink a bit less. I sleep better and am happier, less stressed and more positive when I exercise. All good things considering everything that is going on in my life at the moment. And if my clothes fit a little better that can only be a plus.

So mini pizzas, with bacon, onion, cheese, olives, basil, salami, and possibly some other ingredients.
Delicious.

We go to Sienna’s in Mt Lawley because it’s close. Monday, Tuesday, Wednesday pizza/pasta specials are an added bonus. And generally we get a good feed.

Last night, not so much. Mr Sparklesness’ spaghetti cabonara was nothing spectacular, and my pizza (chicken, capsicum, olive, and mushroom) was tasty but soggy. I had to fold it over itself to eat it without it collapsing.

The coopers on tap went down a treat though. And for a dinner for 2 for under $50 it wasn’t all that bad.

It probably didn’t help that I was in a cranky panda mood and it was rubbing off on Mr S (as he shall now be known as he refuses to be known by his initial, and Mr Musicfoodlife is silly and Mr Sparklesness takes too long to type on an iPhone).
It was one of those evenings where all the topics of conversation were disagreeable, and no middle ground could be found.

After Sienna’s we stopped at Clarences for a quick pint. It’s a new bar that just opened up, it’s a bit niche (read: wanky) but I think I better reserve judgement until I’m in a better frame of mind. 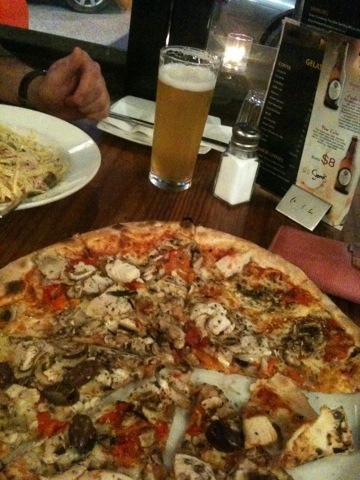 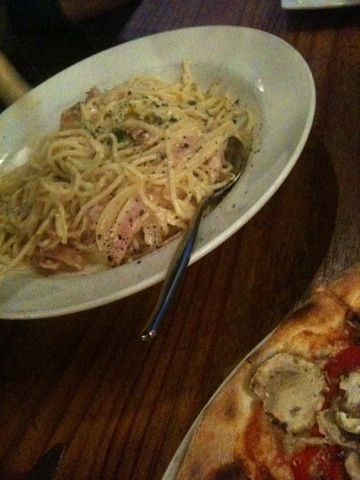