Usually after seeing a couple of bands on the weekend the first thing I do is play them on repeat, download all my photos, and try and re-live the experience.

Instead after the weekend I’ve slipped hard into the latest Bombay Bicycle Club like it’s a happy place. I haven’t even downloaded the photos yet.

Maybe I went into seeing the National with such high expectations I was only going to be disappointed. But if I had high expectations it’s because they set them the last time I saw them.
I wanted them to make the Belvoir a magical place full of quiet awe, using all the variation and subtleties that their music delivers.
Instead they played a lacklustre rock show.

DJ Shadow I was hoping to be like Cut Chemist was last year. The good vibes of Perth Festival with a style of music that I don’t really listen to but a performance which I enjoyed anyway.

Sampology was great. It was a different set to the one he played at Southbound but it was still a good time.

Then DJ Shadow came on. And went off twice because of sound issues. The festival gardens was absolutely packed with people standing on the stairs. For 2 years now we’ve snagged a couch and had the best view in the house. Instead of having a view there were people on the stairs and no security to tell them to move along.

At one point there was a line to get out of the stage area to get to the line to the toilets.
Needless to say it wasn’t exactly enjoyable. Even Hewhofishes who has seen DJ Shadow x times before said that he didn’t enjoy it.

So we wrapped up our Perth Festival with Buke and Gase supporting the Tallest Man On Earth.

I’d seen the Tallest Man on Earth before and it was fantastic.
I did some research on Buke and Gase the day of the gig and found their bio and their music really interesting. Particularly the concept of making your own instruments.

The it was the Tallest Man On Earth.
It’s so difficult to get a photo of Kristian Mattson because he’s always moving around the stage with such energy and enthusiasm.

He played a good set of songs from all his albums, and he opened with my brothers favourite King of Spain.
I have great difficulty deciding on my favourite song, but I wasn’t disappointed with his set. I felt like I heard everything I wanted to.

With an almost full moon shining over the stage, it was the perfect way to finish what was a great series of concerts. (Even if everything didn’t go quite as smoothly as previous years – I’m looking at you security guard who took the key home and they had to hacksaw off the lock so they could let everyone in)

Check out my previous songs of the week

The last few weeks my city has become alive. Perth Festival and Fringe World transform my city from dullsville (which is a popular name), into a hive of activity with three new bars in the city, outside entertainment, and mermaids!

Every year I say that I should get out and explore Perth Festival more, and this year I actually did.

Of course I forgot my camera for the first 4 shows I went to.
In all fairness, one of them was Laneway and I wasn’t really keen on taking my camera, and I haven’t got the photos off my Blokes camera yet.

So I only have crappy iPhone photos of Laneway Festival, Stars, Father John Misty, and Sleepy Suns.
But I do have some awesome pics from Tim Rogers to show you.

Tim Rogers is an Australian rock and roll icon. His band You Am I shaped the lives of countless Aussie teenagers with break-up songs, party songs, drinking songs, and everything in between. Being one of these Aussie teens it’s surprising that it was my first time seeing Tim Rogers. So I was pretty chuffed when he put on a good show.
He’s the quintessential showman although, some nights it’s ‘I’ve just drunk a bottle of red wine- lets do this!’, others it’s ‘I’ve just drunk a bottle of red wine- do I really have to go on stage??’.
We got him on a good night, and boy did he put on a show.

As my best friend said “cool is an overused word, but in every sense of the word Tim Rogers is cool”.
Maybe that quote is better when you actually hear it.
Tim Rogers does exude coolness, except when he took off his shirt. That was hot! 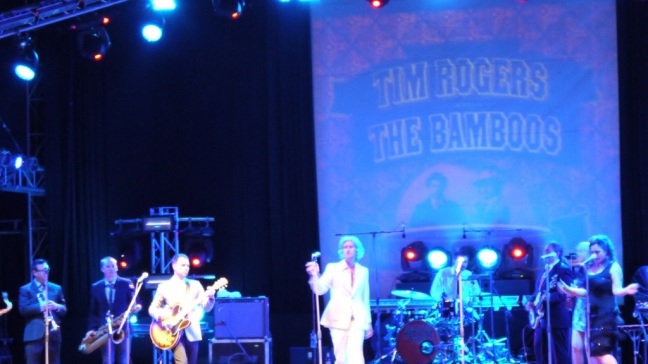 listen to the album 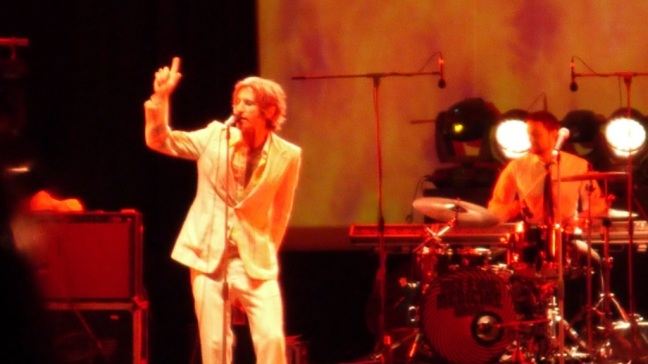 Mostly because I’m seeing them tonight!

This is the song that first drew me to them.

And this is their latest single.

listen to Theory Of Relativity on spotify

Perth Festival has been impeccable this year.
Not only is the location darling (see my post on Death Cab for pics of the rubber ducky fairy lights) but there have been some awesome bands too.

Cut Chemist are one of my Misters bands. The story goes, if he hadn’t have discovered Cut Chemist then he would still be into gangsta rap, and his first impression would not have impressed me enough to date him.
I still can’t stand rap, but Cut Chemist’s talent is undeniable.

He is a talented musician on those turntables. Just watching what he can do is impressive.

And he’s a nice guy too! He came out and signed some merch and my bloke got a photo with him (which has made all of his workmates very jealous).
We also saw Russell Woolfe (a local radio celeb) who was also really nice as we chewed his ear off while he was having a night off.

Cut Chemist isn’t an artist I would buy a CD of (the Mister certainly would) but his live show was very entertaining.

I seem to be gushing a lot lately, but Death Cab on Saturday night were amazing. Festival Gardens is an awesome venue and I sincerely wish that it becomes a permanent venue, not just for 3 weeks during festival.

Couches should be mandatory at gigs. It felt like we were watching a band whilst relaxing at home.
It also helps when the band you’re watching is polished and professional. 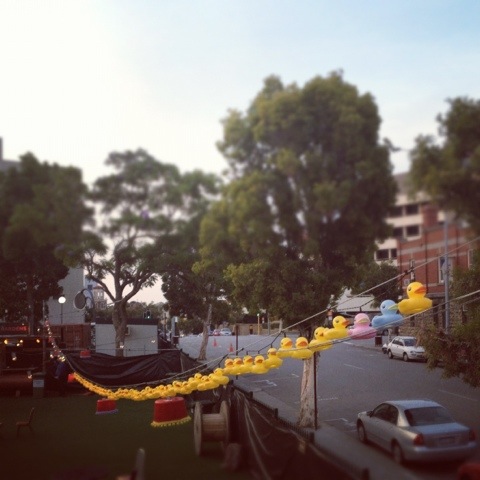 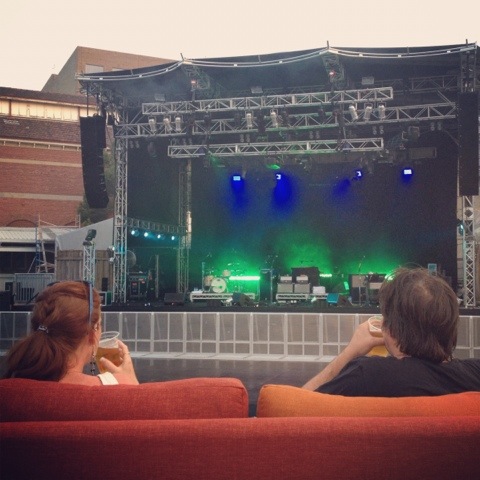 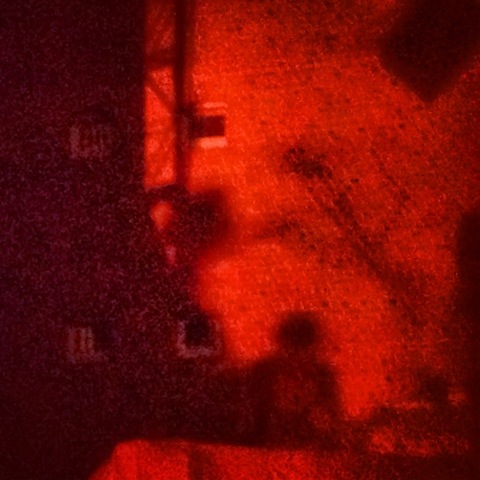 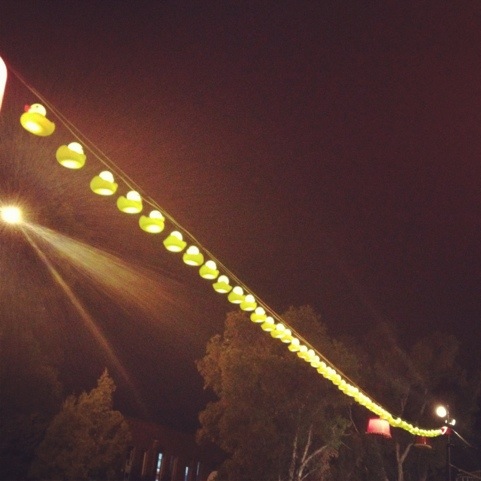 The Becks music box is a wonderful location for live music.
Just on the swan river, it’s accessible, the summer weather has been perfect (if not a little hot), and it reminded me what I tell myself every year I need to get more involved in Perth Festival next year.

Beautifully decorated with fairy lights, silhouettes of chandeliers, and littered with cosy couches (seriously, more live music venues need couches), the design was well thought out and gave a real sense of intimacy and warmth.
The drinks lines were short, and even though there was only a few selections available I didn’t hear many complaints about the lack of selection. Myself being a Becks drinker I was happy.
END_OF_DOCUMENT_TOKEN_TO_BE_REPLACED